Calipers are part of a disc brake system. A caliper squeezes the pads against both sides of the rotor when the brake is applied. When the driver’s foot presses on the brake pedal hydraulic pressure is generated and moves from the master cylinder to each brake caliper. Fluid pressure inside the caliper then pushes one or more pistons in outward to apply the brakes. This forces the brake pads to push against the brake rotors. The brake pad has a block of friction material fastened to a metal backing plate. This material wears out after many stops, requiring the brakes to be serviced.

If the bushings on a floating caliper are rusty, worn or damaged, the caliper may stick causing the pads to drag and wear unevenly. A “sticky” or “frozen” caliper can also cause the brake to drag if the caliper does not allow enough movement to release the brake.

Diagram of the caliper assembly for a disc brake system

A customer brought in their 2006 Nissan Xterra concerned that their brakes were grinding. Our technician took the Xterra on a road test to verify the customer’s concern. The technician confirmed the noise and continued his visual inspection on the vehicle. It was concluded that the rear calipers had become frozen and the piston was broken. The left rear caliper pistons had broken off and jammed into the rotors (no pad left). The right rear caliper was stuck on and the pads were metal to metal.

For the customer’s safety, we recommended a complete Rear Disc Brake Job. We installed rear brake pads, removed and replaced the rotors and calipers, along with inspected the brake hoses. In addition, we repacked the wheel bearings and topped off the brake fluid. The customer’s Xterra is now safe and stopping properly! 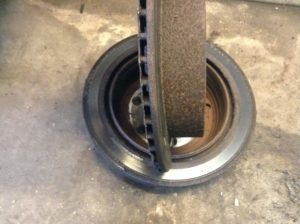 Worn out brake rotor caused from a frozen caliper! The friction material wore out and caused the metal backing to rub again the rotor. 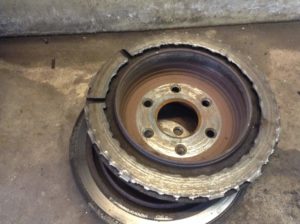 Top view of the worn out brake rotor