Rattling Exhaust? Here’s what to do.

Posted on November 16, 2020 by Nicole Palange in Auto Repair, Tips From The Pros 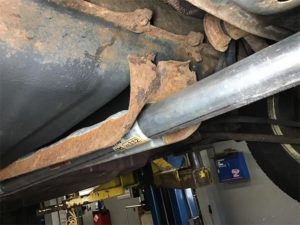 A rattling exhaust can be both annoying and nerve-racking. Rattling in the exhaust is a common cause of heat shield issues, which can cause permanent damage to your vehicle. Here are some of the other common signs to watch for:

1) Excessive Heat from the Engine Bay

Modern engines generate considerable amounts of heat, just from normal operation. A majority of the engine’s heat is released by the exhaust manifold, the metal pipe through which the exhaust gases exit the engine. But, in order to prevent extreme heat from damaging the components under the hood, a heat shield is used to help manage and contain the high temperatures.

When the heat shield is damaged, one of the first symptoms is typically excessive heat from the engine bay. If the part becomes damaged or lose, it can’t provide the proper protection causing heat to soak into the engine bay. The vehicle will usually be warmer than normal near the vehicle’s front of the end, and even more so when the hood is opened. In some cases, the hood may even become too hot to touch, as it absorbs the excessive heat.

Another common symptom of a failed or damaged heat shield is a burning smell. If it fails to protect the engine from the exhaust heat, peripheral parts can be easily damaged—and if that heat reaches plastic or other sensitive components it may cause them to overheat and burn up. This can not only produce a smell but, in some cases, even smoke, on top of damaging the affected part.

3) Rattling Noises From the Engine Bay

As we mentioned before, another common sign of a failing heat shield is rattling noises. If the heat shield becomes loose due to poor hardware or rust damage, it will cause the heat shield to vibrate and produce a rattling sound. The sound will be most prominent at lower engine speeds and may change in pitch or tone as your speed changes. A professional inspection would be required to determine if your heat shield is broken or simply loose.

While most heat shields will last the life of the vehicle that does not mean that they are not susceptible to failure. If you suspect that your heat shield may be having an issue, have the vehicle inspected by a professional technician at V&F, to determine if the shield should be replaced. All of our auto repair services are backed by an industry-leading 3-year / 36,000-mile warranty on parts and labor. Call us today at (413) 314-2280 or schedule an appointment online.