The Cost of Replacing An Engine Mount | V&F Auto Inc 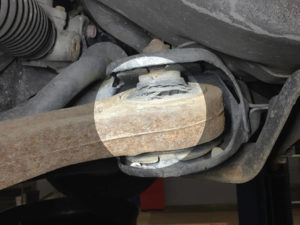 Engine mounts secure the engine of a vehicle to its chassis, keeping the engine stabilized and aligned with the frame of the vehicle. They’re usually made of metal and rubber– the metal is used to be able to withstand the force and torque generated by the engine, while rubber helps to dampen the vibrations. As engines generate a considerable amount of vibration in their regular operation, when there is a problem with the motor mounts, it can usually be quite noticeable. Usually, problematic motor mounts will produce a few symptoms that can alert the driver of a potential issue that should be serviced. Here are the top four symptoms you should look out for:

Since the engine mount stabilizes the engine, it makes sense that a bad engine mount would cause instability with the engine. If the mount is broken or corroded, the engine can vibrate because as it’s not held firmly to the frame of the vehicle. The passenger side of the cabin will usually feel the vibrations even more– sometimes the driver won’t even notice these symptoms until they have another person sitting in the passenger’s seat.

When you have an engine that’s shaking, vibrating, and moving around in the frame, it can also  cause knocking and clanking noises from the engine bay. While these sounds can be caused by other things too, your should definitely check your engine mount if you are experiencing this in combination with one of the other symptoms listed here.

When the engine is misaligned, it will tilt toward one side more than the other side. If you already suspect that your engine mount is bad because the other symptoms listed here are present, then take a look at your your engine mount and see if it is tilted. This will indicate whether the mount is truly bad– or if there’s another potential culprit.

When you have an engine that is not stable because of a bad engine mount, the most fragile components in the engine are going to break easily– the belts and hoses. Rubber components like these that can’t take as much wear are likely going to get damaged, especially as you accelerate faster in your vehicle.

On average, engine mounts cost several hundred dollars to replace, depending on how difficult it is for the mechanic to access your engine mount. That’s why it’s important to be attentive to your engine and address any signs of malfunction as early as possible.

At V&F, our top priority is keeping our customers safe on the road. Since 1988, our family owned and operated service center has been providing top quality auto repair services to Agawam, Feeding Hills, Southwick, West Springfield and the surrounding Massachusetts communities. If your car needs maintenance or repair, call us at (413)314-2280 or schedule an appointment online.