Posted on November 2, 2020 by Nicole Palange in Auto Repair, Maintenance 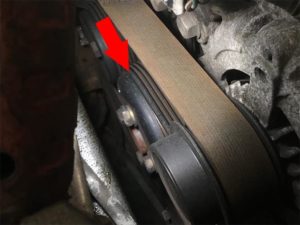 Wondering when to replace the belts under your hood? Common signs of wear can be hard to see if you’re not a trained mechanic. Here are a few mileage milestones to look for:

V-belts act as a transmission belt. It connects to pulleys and transmits the force from the engine to the ancillary components including the alternator, the hydraulic pump for the power steering, the air conditioning compressor, the fan and the water pump. V-belts tend to wear more quickly than others. Most belt manufacturers recommend having the v-belt inspected every three to four years or 30,000 to 40,000 miles. Around these milestones, v-belts should be inspected and replaced if there are any signs of major wear, as failure rates rise sharply after three years of service.

The serpentine belt, also called the drive belt, is a belt on a car engine that works with the idler, tensioner, and pulleys inside the accessory drive belt system. It provides power for the air conditioning, alternator, power steering, and sometimes the cooling system water pump. The serpentine belt is a critical part of this system, that operates whenever the vehicle is running. If this belt isn’t functioning properly, your engine may not run at all.

Serpentine belts started becoming more common during the 1990s, this belt replaces the more complicated multi-belt systems on older cars. Older serpentine belts made of Neoprene need to be replaced every few years, while the newest EPDM models can last up to ten years or just under 100,00 miles. Most belts are much less, with failure rates spiking after just four years. A skilled technician can measure the wear on these newer belts and then recommend replacement based on that measurement.

Knowing the condition of your vehicle’s belts, and getting them replaced when worn, could save you from a costly and inconvenient repair. If you want to know what shape your car’s belts are in call us today at 413-314-2280 or schedule an appointment online.