Problems with your serpentine belt? Here are some common causes

Posted on August 29, 2018 by Nicole Palange in Auto Repair 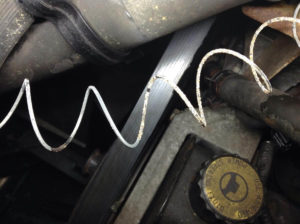 The serpentine belt, also called the drive belt, is a belt on a car engine that works with the idler, tensioner, and pulleys inside the accessory drive belt system. It provides power for the air conditioning, alternator, power steering, and sometimes the cooling system water pump. The serpentine belt is a critical part of this system, that operates whenever the vehicle is running. If this belt isn’t functioning properly, your engine may not run at all.

Serpentine belts started becoming more common during the 1990s, as this one belt replaced a more complicated mult- belt systems on older cars. Older serpentine belts made of Neoprene need to be replaced every few years, while newer models can sometimes last up to ten year or just under 100,00 miles. Most belts won’t last nearly as long, with failure rates spiking after just four years. Technicians can typically measure the wear on these newer belts and then estimate the time for a replacement based on that measurement.

Serpentine belt issues usually result from a misalignment, a defective tensioner, or simply getting old. It might be hard to diagnose a problem just by listening but, by examining the belt itself, your mechanic can usually diagnose the problem. Here are a few common problems they might find:

Excessive cracking is usually caused by old age. Serpentine belts stretch with age and use; as time goes on, the rubber becomes dryer and less pliable making cracking more prevalent. However, cracking can also be caused by a defective tensioner. The tensioner is spring-loaded to keep the belt tight on the pulleys. If a belt starts slipping, the tensioner should always be checked to see if it is functioning properly.

Glazing on the edges, ridges, or grooves of the belt are caused by the belt slipping. Slipping can be result of a loss of belt tension (or a weak automatic tensioner) or pulley misalignment. When the belt slips off the track, the friction between the belt and accessory drive pulleys causes the belt to overheat. If you hear a high pitched squealing noise, it’s probably time for a switch.

Fraying at the edge of a belt typically indicates misalignment of the pulleys. When the belt is not properly on the pulleys, the scrapes on the top edge of an accessory drive pulley side as the belt feeds into it, eventually causing the belt to fray. Diagnosing this is pretty easy- the wear on the edge of the belt is usually visible. You might hear a thumping or rubbing noise, as the belt rubs against the pulleys.

If you see noticeable wear on your serpentine belt, or hear an unusual noise, come in to see us as soon as possible. We’ll help you diagnose the problem, make the necessary repairs, and work to prevent it from happening in the future. Plus, all of our auto repair services are backed by an industry-leading 3 year / 36,000 mile warranty on parts and labor! Call us today at (413) 314-2280 or schedule an appointment online.